With the party season just about to begin (if it hasn't already!) it seemed a good time to share some self help tips for the season. For long standing or chronic ailments, it’s important to see a practitioner, but there are several homeopathic remedies which might help with minor symptoms of over indulgence over the festive period: 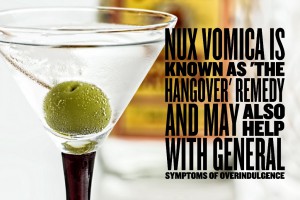 Nux vomica: this is known as “the hangover” remedy but can also be used for the general symptoms of over-indulgence. Symptoms include heartburn, indigestion, and nausea, a headache, sensitivity to noise and light, and irritability. Particularly suits people who tend to burn the candle at both ends, who keep going with coffee and feel the cold.

Arsenicum: this remedy comes into play when the symptoms are like that of food poisoning, with vomiting and diarrhoea, loss of colour in the face and anxiety. Could also be used when the diarrhoea is anxiety-induced, worse at night with burning in the stomach and a desire to sip water. It suits restless people who are fearful worriers, need to plan and feel the cold.

Sulphur: symptoms include offensive diarrhoea which drives the patient from bed in the morning, excessive sweating, and burning feet. Suits stubborn people who need praise, worry about their health, can be peevish with lots of big ideas they find difficult to actualise. They crave sugar and spicy food.

Lycopodium: symptoms include bloating with wind, a huge appetite, and waking as if from a fright. There is heartburn with sour burping. Suits fearful people lacking in confidence who don’t like undertaking new news. But can be bragging and assertive at home.

Arnica: this is a great remedy to help with bruising and that “battered” feeling you get after last-minute Christmas shopping or bargain hunting in the January sales.

Wishing you a sparkling season of goodwill,

With very best wishes from us all at Find a Homeopath!

If you need assistance from a homeopath then have a look at www.findahomeopath.org to find a practitioner near to you.

Summer, the season of the great outdoors is upon us and homeopaths are frequently called on to assist with acute summer injuries and ailments. With thanks to www.materiamedica.org.uk, here's some of the 10 commonly used remedies for the acute ailments of the season. 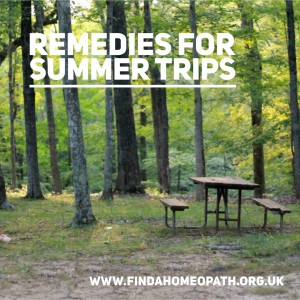 Argentum nitricum (Silver Nitrate)
Fear of flying. Anticipatory anxiety and gastro-intestinal problems (belching / flatulence). Suits warm-blooded people with a tendency to feel hurried and impulsive. They may have a fear of failure when having to perform in public. Their fear is justified, as they often rush through things and get into a mess. (cf Gelsemium & Lycopodium). Pains splinter-like. Better: open air; walking fast. Worse: crowds; sweets (gets diarrhoea).

Arnica (Leopardsbane)
Accidents / shock / physical exhaustion. First choice for most minor accidents, falls, injuries or physical ordeals. Swelling and bruising. Patient has a fear of being touched because of the pain, and may want to be left alone. May claim to be alright when they clearly are not. Classic response of someone in shock. Upper body is hot, whilst lower is cold. Memory may also be poor. Better: Lying down. with head low. Worse: jarring; Lying on injured part.

Arsenicum album (White arsenic)
Acute food poisoning. Characterised by great physical prostration with mental restlessness. Patient does not want to be left alone and is anxious or fearful. Cant bear the sight or smell of food. Pains and discharges are burning, yet the patient feels chilly and all symptoms, except headache, are better for heat. Thirsty for frequent sips of usually hot drinks. Hayfever with watery discharge. Better: warmth; Lying down; Worse: midnight - 3am.

Cantharis (Spanish Fly)
Minor burns and scalds. Cystitis, where there are burning pains before, during or after urination. Urging to urinate. Intense mental and physical irritation. Onset is sudden and violent. Pains are cutting and burning. Patients have a burning, intense thirst, but are worse after drinking (especially cold drinks). Better: cold applications. Worse: touch.

Hypericum (St John's wort)
Injury to nerves especially of extremities and sensitve parts. First aid for lacerated wounds from sharp instruments or any injury to nerve-rich areas (e.g.from slamming door on fingers, toes or falling on the coccyx). Pains are extreme and shoot along the nerves. Punctured wounds, Injured nerves from bite of animals. Generally worse for motion or pressure.

Ledum pal. (Marsh Tea)
Puncture wounds and black eyes. Wounds and bites from both animals and insects. Pains are sticking, tearing and throbbing. Area is swollen, blue and cold but, strangely, feels hot to the sufferer. "Ledum is an antidote to the stings of insects' - Boericke. Better: cold applications. Worse: heat.

Rhus toxicodendron (Poison Ivy)
Sprains and strains. Stiffness, coupled with terrible restlessness. Pains usually around joints, which ache, feel sore, bruised. The pain is worse on first movement, with a tearing or stitching sensation, but this eases after continued movement, provided it is not too strenuous. During colds, fevers, flus, a triangular red tip at the end of their tongue is an excellent confirmatory symptom. Children who crave cold milk. Better: heat; gentle motion. Worse: damp, cold weather.

Ruta graveolens (Rue)
Strains and sprains of tendons. Injuries to cartilage and bone surface. It is less restless than Rhus Tox. Bone feels damaged. Injuries to wrists, knees, ankles or bones with a thin covering of flesh (e.g shins). Eye strain followed by headache. Better for movement. Worse: lying on the affected part.